Ever since it was formed in 2001, Jazz Promo Services has been an important force in publicizing the music, events and news of the jazz world. Among the pioneers and innovators in utilizing E-mails for publicity (he can contact virtually anyone in the jazz and music industry), Jim Eigo works with hundreds of clients each year as a publicist, producer and enthusiastic spokesman, creating short, medium and long-range career development strategies. He is unparalleled in informing the jazz world about recording releases, concerts, clubs and all types of relevant information.

In addition to these and other veteran greats, Jazz Promo Services also works with many young artists at the beginning of their careers and with any performer (in any style) who has something to say in their music.

Even before 2001, Jim Eigo already had a lifetime of experience. Always enthusiastic about hearing and seeing music, Jim Eigo got his start in the music business as a teenager, working for a jukebox distributor in Brooklyn where he was paid in used records. He worked at Cox Records in Brooklyn and Strand Book Store before landing an important job with Happy Tunes Records in the early 1970s. “It had an eclectic crew of people with every conceivable department having an expert working for them. My mentor was Fred Norsworthy who was responsible for the jazz section. He taught me everything that I needed to know and then, when he left, I was considered the jazz expert and ran the jazz department. Rahsaan Roland Kirk was one of our regular customers at Happy Tunes. Ornette Coleman and Cecil Taylor would drop by and hang out, along with whoever was appearing at the Village Vanguard. It was the heyday of the Jazz Loft era. I was in my twenties and going out every night, seeing everyone from Alberta Hunter and Mary Lou Williams at the Cookery to whichever great was performing at Sam Rivers’ loft Studio Rivbea. When Alan Douglas and Michael Cuscuna recorded the Wildflowers sessions, I was there. Years later, in the late 1990s, I had the opportunity to work with Michael Dorf and help him with the reissues of those albums.”

Jim set up a mail order company for Happy Tunes and, when the record store was nearing its end, they gave him the mailing list. “That is how Daybreak Express was started. I worked with that company on and off for quite a few years, importing Miles Davis records from Japan and handling many small labels. Simultaneously I became friends with the people from the New Music Distribution Service, went to all of the JCOA workshops, and worked with Michael Mantler and Carla Bley, becoming the sales manager for JCOA.” Other gigs included being hired to set up the Soho Music Gallery, managing the jazz department at J&R Music World, and working for Horace Silver’s Silveto label while still overseeing Daybreak Express.

In the 1990s Jim became the label manager of the Dreyfus label, overseeing their releases. “Jazz Promo came out of that. When Dreyfus had a new release coming out and there was a budget, I would use a publicist. But when they did not have a budget behind a release, it was up to me to do all of the publicity. I gained very valuable experience doing press and radio while building up a database of contacts. When I left Dreyfus, in January 2001 I formed Jazz Promo Services.”

With his experience in retail, record production, marketing, distribution and publicity, Jim Eigo was ready. He became an early adopter of E-mails and was soon known as “The King Of Jazz E-Mail.” “E-mail marketing is what put us on the map. I first sent out notices for artists who were doing one-off gigs, primarily in NY. Then I started really building up my lists so I could distribute other’s press releases to everyone who would be interested.” His New York Hot List has 3,500 contacts by itself, has separate lists for each area of the United States, and internationally has over 10,000 contacts. Jim Eigo can hit target markets for specific live events while casting a very wide net for record releases.

In addition to Jazz Promo Services, Jim worked as the publicist for the Iridium, Les Paul and their other featured artists for a decade, he did the marketing for many years for the Cornelia Street Café, and is the long-time publicist for Jack Kleisinger’s Highlights In Jazz. A year ago he opened Original Vinyl Records, a record store in the Hudson Valley. While one wonders how he finds the time and energy, Jim Eigo simply says, “I love being around records, talking about records, and meeting people who love records.” The store’s friendly atmosphere and wide variety of recordings reflects its owner’s personality and flawless musical taste. (more information can be found at www.originalvinylrecords.com)

After 20 years, Jazz Promo Services remains the leader in its field. How have things changed during the past two decades? “The technology has of course changed, particularly the way that one communicates with editors, writers, jazz fans and musicians. We always have to stay up to date. What has not changed is that one still has to do basic PR 101, particularly writing a really good press release, advancing your dates so you are way out in front, doing regular reminders, and building relationships with all of the important people in the business.”

In summing up his life, Jim Eigo says, “I am very fortunate, am still pretty healthy, and have managed to put together a living out of the jazz business, finding my niche and purpose. The music keeps me young. I’m particularly inspired by Bob Koester who is in his eighties, ran the Delmark label for so many years, and still owns the Jazz Record Mart. Like him, I’m doing what I love.” 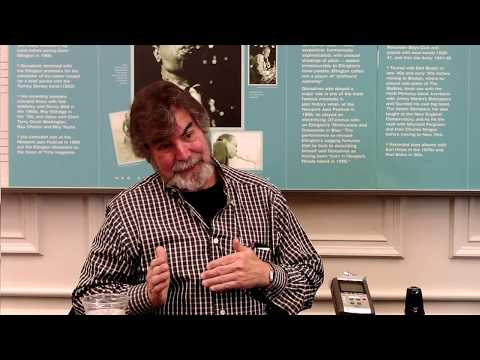